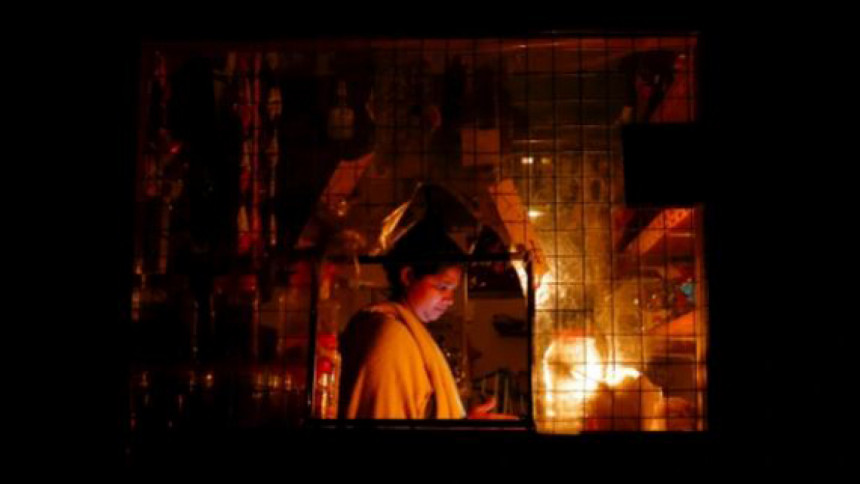 A woman works inside a shop attached to her house during a power cut in Colombo. Photo: Reuters

The South Asian nation of 22 million people is in its worst economic spiral since independence in 1948, sparked by an acute lack of foreign currency to pay for even the most essential imports.

The country had been under severe electricity rationing since the start of the month and the monopoly said an earlier hike in power outage from seven hours to 10 hours was imposed because there was no oil to power thermal generators.

More than 40 per cent of Sri Lanka’s electricity is generated from hydropower, but most of the reservoirs were running dangerously low because there had been no rains, officials said.

Most electricity production is from coal and oil. Both are imported but in short supply, as the country does not have enough dollars to pay suppliers.

At least two more hospitals reported suspending routine surgeries because they were dangerously low on vital medical supplies, anaesthetics and chemicals to carry out diagnostic tests, and wanted to save them for emergency cases.

The country’s biggest medical facility, the National Hospital of Sri Lanka in the capital said it had also stopped routine diagnostic tests.

An official added however that the facility continued to receive power supply from the national grid.

Sri Lanka’s main fuel retailer meanwhile said there would be no diesel, the fuel most commonly used for public transport, in the country for at least two days.

Local broadcasters reported widespread protests across the country demanding fuel for private vehicles, which are also used for public transport.

There were no reports of violence, but hundreds of motorists blocked main roads in several towns while dozens demonstrated outside the Central Bank of Sri Lanka in Colombo demanding the removal of governor Ajith Cabraal.

MORE ON THIS TOPIC

Sri Lankans stand, sweat and seethe as economy grinds to a halt

‘This is the poorest and most anxious I have ever felt’: Sri Lankans suffer amid economy’s meltdown

Officials from the state-owned Ceylon Petroleum Corporation urged queuing motorists to leave and return only after imported diesel is unloaded and distributed.

Fuel prices have also been repeatedly raised, with petrol costs nearly doubling and diesel up by 76 percent since the beginning of the year.

Colombo imposed a broad import ban in March 2020 to save foreign currency needed to service its US$51 billion (S$69 billion) in foreign debt.

But this has led to widespread shortages of essential goods and sharp price rises.

The government has said it is seeking a bailout from the International Monetary Fund while asking for more loans from India and China.

Sri Lanka’s current predicament was exacerbated by the Covid-19 pandemic, which torpedoed tourism and remittances.

The country’s statistics office on Wednesday announced economic growth of 3.7 per cent for the 2021 calendar year, before the crisis began to bite – up from a record contraction of 3.6 per cent the previous year.

No comments to show.